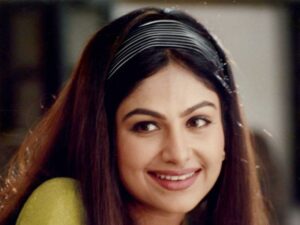 Ayesha Jhulka recently opens up about everything in an interview including her not regretting to get back in films. She says – ” “There were a lot of films that I couldn’t do. I couldn’t do Mani Ratnam’s Roja due to date issues and I regretted it. Then there was a Rama Naidu film, Prem Qaidi which I had to reject because I was supposed to be introduced in a bikini in the film.”

When asked to Ayesha Jhulka of with whom is she in touch with still, she says – “I am in touch with Jackie Dada, who does a lot of social work, especially towards the betterment of animals as he is also an animal lover. I wanted to start an animal ambulance in Lonavala and he recently donated a van to us. I am also in touch with Bhagyashree, Raveena Tandon, Hema Malini ji and a few more.”

She further continues and tells – “Recently, I had a little mishap with my dog, and realised that a lot of people support me. It is like a family. Here I would like to mention a person whom I have never worked with but who reached out to me–John Abraham. I really appreciate his support as not many people do that. I had met Aamir after years and nothing had changed; even when I meet Govinda, it’s like no time has passed.”