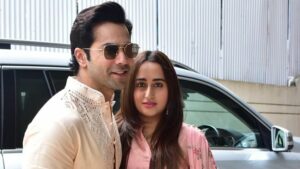 Everyone’s eye is on Varun Dhawan and Natasha Dalal‘s wedding announcement. Meanwhile there are many rumours being circulated here and there. Varun Dhawan’s uncle Anil Dhawan recently refutes over on of the most viral rumour saying that they are going to marry this month in Alibaug. Anil Dhawan says – “Wow, I am surprised. They are marrying this month, and we didn’t know? Are they going to invite us at the last moment? Itna secret rakh rahe hai kya (Are they keeping it that big a secret)?”

Anil Dhawan also shares that they all have been him to settle his life. Talking about this Anil Dhawan says – “Whatever it is, as a family we have been persuading him to get married soon. I feel this is one ritual you got to do in time. There is no point prolonging it. Do it in time or just don’t do it!”

Anil Dhawan also shares that family is being advising him to held a simple ceremony. He further says – “We have been telling him to skip plans of hosting grand celebrations, instead do a simple intimate ceremony aur bas ladki ko jaldi ghar le aao (and just get the girl home at the earliest).”