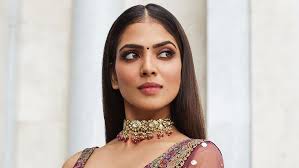 Malavika Mohanan recently open up about movie Master in acting with Thalapathy Vijay. She opens about working under Lokesh Kanagaraj directorial and Vijay. She recently accepts that her role in film is not too long. Malavika Mohanan says – “I shot for the film in New Delhi, Shimoga, and Chennai. By the end of the first schedule in Delhi, Vijay sir slowly started opening up to me and we became good friends by the end of the film. He’s largely a reserved person, but. Lokesh’s team was really energetic & happening, as all of them are youngsters and we had great fun shooting for the film.”

While she also shres her experience of working with Vijay. Meanwhile she talks about this and says – “He is a perfect gentleman. The way he treats his co-artists on the set was very sweet. He makes everyone comfortable and was encouraging as well.” While meanwhile, she has begun shooting for her next film with Dhanush in Chennai. She has also been busy promoting Master in Mumbai.

Meanwhile, the Master had a massive opening at the box office. As per Taran Adarsh, Master has a fabulous start at the box office and the film is also expected to wreak havoc in the Indian and International market.