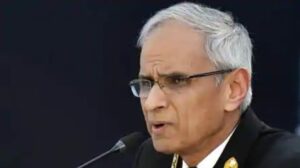 As said by Karambir Singh China is trying to attempt the changes in status quo on the line of actual control (LAC). But due to this era of pandemic security situations are at risk. While Indian Navy is deploying its P-8 Poseidon aircraft and Heron drones for the surveillance. The surveillance is right now in action at Northern Frontiers. Karambir Singh is a naval chief.

For sea the air power is an essential component, Karambir Singh says. He says, to acquire a third aircraft carrier, Indian navy is working on. While all this is going on, Karambir Singh says that they are ready to face challenges in such crucial times too. China is interrupting many things around the LAC and they all are aware about this. He says that everyone is aware about pandemic era. But China is now increasing the complexities.

To keep an eye over Ladakh sector of the LAC, he says that maritime aircraft and Heron unmanned vehicle are deployed in north region. While keeping all this in mind, they also allotted two MQ-9B Sea Guardian drones. It is having 33 hours of endurance. He makes everyone aware about how drones sublets from US right now. On this he says we are doing this to fill the gaps of navy’s capabilities. But apart from all this, he says that during such disruptive stint too they all have managed to participate in 13 bilateral and multilateral drills in 2020. Karambir Singh says that they are ready for the effective impacts and challenges about to occur due to China.