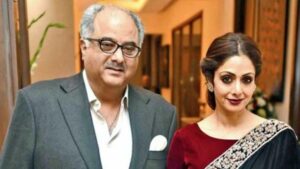 Boney Kapoor says – “Sridevi was one of those rare artists who are so gifted. That their absence leaves a void that cannot be filled. But I remember her as a great and down to earth human being, a very dedicated mother and an extremely loving wife. Sridevi the human being, wife, mother and friend was very different to Sridevi the artist.”

He adds – “I still remember when we were shooting for her last film, Mom, in which Sri had to portray the anguish of a mother whose stepdaughter is raped. She did not let me stay in the same room with her during the shoot as she wanted to be in the “zone” of her character and feel her pain. She won the National Award posthumously for that role but that’s the seriousness with which she approached her work. I don’t think we will ever be able to fill her void. Having said that, lives have to move on.”

Boney Kapoor shares – “Our family, especially all my four children (Arjun and Anshula from his first wife, apart from Sridevi’s daughters Janhvi and Khushi), have stood together and braved this situation. They are now the pillars of my life and I look to them for all the love, support and affection”. Boney Kapoor feels the best tribute he can give to Sridevi is by being a good father.

He shares, “My best tribute to her would be to be a great father to our children. And be there for them in the way she would have wanted to. And as a professional and ardent fan of hers. It would be to make the kind of entertaining and heartfelt content that she would have been proud of.”