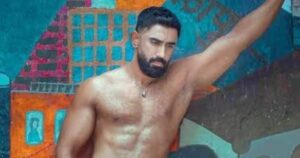 Amit Sadh ’s upcoming web series, Jeet Ki Zid, inches closer by the day. It will stream exclusively on ZEE5 and is inspired by the true story of an army officer. Talking about it, Amit Sadh says – “I have immense respect for the army, their dedication to serve the country is commendable, and whenever I get a chance to play the role of an army man, I always feel humble.”

Amit Sadh further adds and says – “The uniform they wear represents their dignity and attitude of never giving up. And when I get the chance of wearing the uniform, it gives me goosebumps. And reminds me of the responsibility that comes along with wearing it.”

Zee5’s Jeet Ki Zid is inspiring by a true story. It is a testimony to the real-life story of Kargil war hero Major Deependra Singh Sengar who fight against all odds in different walks of life, be it on the battlefield or when it came to overcoming insurmountable personal odds.The web series endeavours to capture all of Major Deep Singh’s highlights and turning points in his life. The life of a soldier is chronicle in the show, pepper by some high-octane action sequences and various army missions.